What I'm Reading: Crown of Midnight

YA Book Review: Crown of Midnight by Sarah J. Maas

I stayed up late this weekend to finish the second book in Maas' Throne of Glass Series. I really enjoy reading this series. The heroine is very anti-hero, and the books are more dark and gory than a lot of fantasy out there. But I will caution that that might not be for everyone. The second book of the series really deepened the plot line, and there were a lot of little details and more history of the world than there was in the first book. I already went out and bought the third book before I'd even finished the second one, which is a good thing since it ends on a cliff hanger. 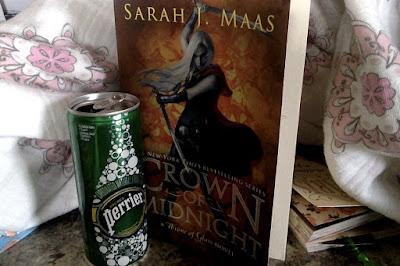 Definitely not the place to start a series, so if you're contemplating it, I would start on book one. It's just as good.

Apple and Rain by Sarah Crossan
Wasting Away by Theodora O. Agyman-Anane
Undertow by Michael Buckley
The Shannara Chronicles
The Selection by Kiera Cass
The Elite by Kiera Cass
The One by Kiera Cass
The Sin Eater's Daughter by Melinda Salisbury
Finding Audrey by Sophie Kinsella
Extraordinary Means by Robyn Schneider
J. E. Hunter is the author of the Black Depths Series. Tales of a Redheaded Sea-Witch, and Black Depths, the first two books of the series can be found on Amazon, Kobo, iBooks, Barnes and Noble, and Smashwords. The third book, Dark Shores, was released April 1, 2016. The fourth and last book of the Black Depths series, Twisted Currents, will be released in the fall of 2016.