What I'm Reading: The One

YA Book and Audiobook Review The One by Kiera Cass

I read this immediately after reading The Elite. The only copy I could find at the library was the audiobook.

I hated the audiobook of The One. I started listening to it, and just couldn't do it. The reader made every voice breathy and drawn out. People didn't speak like I thought they wouldn't, and some people and lines just sounded downright ridiculous. But I really wanted to read the story, so I bought The Selection Collection for my Kobo.

I just could not stop reading. I needed to know the ending (even though I was sure I knew it). This book wasn't as good as The Selection and The Elite, I think because of the end. Just the last couple chapters or so. I thought it could have been so much better than it was. Way more drama, way more terror, or love or romance or something. I guess that the best way to describe it is that it just sort of fell flat for me. I still liked it. The ending was okay. But I'd only give this book 4/5, maybe even 3/5. 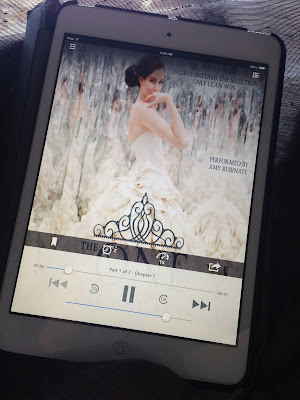 I was hoping that the book to be released this year, The Crown by Kiera Cass, was going to be about the aftermath, and a continuation of America's story, but was disappointed to see that it's not. I thought the series was just getting interesting when it ended. Maybe that's me. Kiera Cass writes a great romance but for me to really love a series, I need more than just the plot line about love.

Maybe next time.  What did you think?

Apple and Rain by Sarah Crossan
Wasting Away by Theodora O. Agyman-Anane
Undertow by Michael Buckley
The Shannara Chronicles
The Selection by Kiera Cass
The Elite by Kiera Cass
The One by Kiera Cass
The Sin Eater's Daughter by Melinda Salisbury
Finding Audrey by Sophie Kinsella
Extraordinary Means by Robyn Schneider
J. E. Hunter is the author of the Black Depths Series. Tales of a Redheaded Sea-Witch, and Black Depths, the first two books of the series can be found on Amazon, Kobo, iBooks, Barnes and Noble, and Smashwords. The third book, Dark Shores, was released April 1, 2016. The fourth and last book of the Black Depths series, Twisted Currents, will be released in the fall of 2016.