What I'm Reading: The Elite

YA Book Review: The Elite by Kiera Cass

I'm pretty sure I said it when I wrote a short review for The Selection, but I cannot believe I like these books so much. Maybe it's because I don't like the TV show,  The Bachelor. I'm giving all the credit to Kiera Cass's talent to write romance. These books leave me needing to know the end (even though I'm pretty sure I know it). I don't know how it gets there, and I want to know every detail. 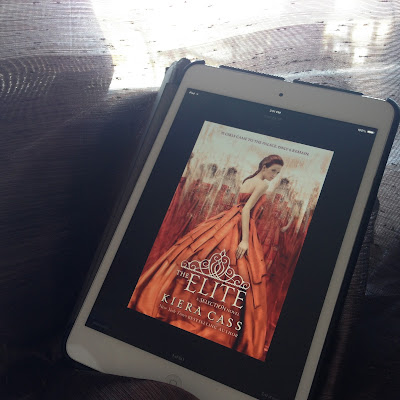 The Elite moved at the same quick pace The Selection did—I finished reading it in two days! The character's desire is palpable, and I felt caught in the drama. I honestly don't have much to say except I want more.

Other Book Reviews:
Throne of Glass by Sarah J. Maas
Apple and Rain by Sarah Crossan

Undertow by Michael Buckley
The Shannara Chronicles
The Selection by Kiera Cass
The Sin Eater's Daughter by Melinda Salisbury
Finding Audrey by Sophie Kinsella
Extraordinary Means by Robyn Schneider
J. E. Hunter is the author of the Black Depths Series. Tales of a Redheaded Sea-Witch, and Black Depths, the first two books of the series can be found on Amazon, Kobo, iBooks, Barnes and Noble, and Smashwords. The third book, Dark Shores, will be released March 28th, 2016. The fourth and last book of the Black Depths series will be released by the end of 2016.